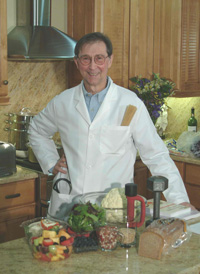 Always recognized as cutting edge, I became aware of the very simple Natural Human Design Rules, called biologic principles, which allow disease prevention and/or reversal where possible of diabetes, high cholesterol, stroke, high blood pressure and even cancer, etc. I am not perfect, or said another way, like most of the people who will read or hear this, I have no holes in my hands nor desire to have any. My philosophy is “let he who is without sin cast the first stone” but also do tell the truth and serve others regardless of the high personal price which often results when one does tell the truth. I am, in fact, one of you and look forward to the opportunity to meet you.

“Bobby was a fat little kid who got all C’s and D’s until the 3rd grade when his teacher took him aside and told him he was smart and could get better grades. Thereafter he became a straight A student. In the 7th grade he was both shocked and depressed when he met two other kids who were twice as smart as he was. Fortunately, this was also when his teenage growth spurt helped him out grow most of his baby fat improving his mood.”

It is a privilege to tell you something about my personal and professional life…
I was born in Bellefontaine, a small town of 10,000 in western Ohio. I graduated fourth in my high school class, was editor of the school newspaper, HiLife, and received a varsity football letter my senior year-only because I stuck it out, not because of ability. I was the 1957 Logan County Ping Pong champ, but was beaten several years ago by my children, Steven and Mark.