When he was 30 years old his cholesterol was 280! The average heart attack occurred at a cholesterol of 220. Both his parents underwent open heart surgery in their 70's, and so he was definitely predisposed to heart disease. By the age of 40 he had changed his diet/exercise and brought his cholesterol down from 280 to 130; no heart attack occurs under 150, and so he was now, in reality, immune to heart disease. He lived in a small and uncomplicated condo, which therefore allowed him the time to work out on his AerobicRider 45 minutes 4 days a week eating fruits and some nuts while cooking brown rice/ vegetables/beans with fish 2-3 times a week. 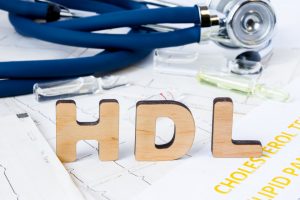 Then he moved to a much larger house that was more demanding, and gradually his diet/exercise became less organized. He cooked less, and regular exercise as such decreased. When he would go to dinners, somebody might trade him ¼ of their steak for ¼ of his fish. If somebody ordered a chicken sandwich, French fries, or pizza he might have a few bites. Occasionally he would take the top off of a chocolate chip/chocolate muffin, throw the bottom away and think he was being discrete even though he knew that he should have none of the muffin. And he was still eating brown rice/vegetables/beans/fruit with some fish. What did this result in? A 20 pound weight gain, a cholesterol of 200 with a good cholesterol (HDL) of only 35 - worse than average risk for a heart attack. When these results returned, with absolutely no special insight, no emotion, or no revelation/epiphany/apocalypse, he realized that it were as if he had simply been "looking in the wrong direction," and he only needed to turn his head and look in the other direction. The former direction ("left") was the chicken/pasta/ bread/cheese/cake/cookies/bagels/muffins while the other ("right") direction was fruits/vegetables/soups/ beans/fish 3 (maybe 4) times a week. He simply decided that those former foods were out of his life. To re-emphasize, it was as if he had only turned his head away from the left and looked now only to the right. It was no more complicated than that! 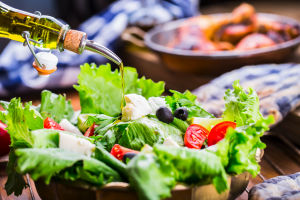 There were no more of the things that he should not be doing. It was not a question of a bite of this or piece of that, there was NO temptation any longer because, once again, the things on the "left" were out of his life. There was no "trying to", difficulty, or will power used, in making these decisions. From now on, he would only have fruits/vegetables/beans/some nuts and seeds, and fish. No more of those "delicious" breads, pastas, cheeses, deserts, etc. He could go out to dinner with people who ordered pizza, grilled chicken, or pasta: he didn't even want to taste it. He would drink a cup or two of organic green tea or hot water with lemon. He was freed, free, and this simple restraint gave him his freedom!! 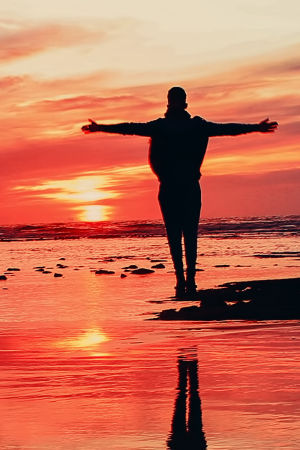 He assisted himself with the visualization of a strength-giving light coming down to him, going out his out-stretched arms and upturned palms making a circle and coming down again. This prayer/meditation of a new external energy image coupled with abdominal breathing gave him an important connection that assisted this transformation. He began to laugh more at himself and not be so critical, negative, and controlling in general. He was not going to be so judgmental about himself or anyone else. He would smile and thank God for what he had been given, he was perfect enough with his imperfections, and these changes were a great blessing. He felt, and was getting, much better. You will too! H. Robert Silverstein, MD Hartford, CT